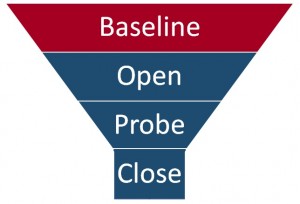 Many people are familiar with the classic question funnel as a strategy.  I’ve modified the funnel and added a preliminary level called “Baseline”.  It is critical to establish baseline responses for the other party in all styles of negotiation.  You want to establish what a genuine “No” sounds like, feels like, and looks like.  The theory is simple, ask questions that A) you know the answer or B) a reasonable person wouldn’t lie.  Small talk is great for establishing a baseline.  Great baseline questions are conversational and immaterial to the actual negotiation.  Questions about hobbies, television, sporting events etc. work well.  Ask questions you are fairly certain will receive a “No” response.  For example when negotiating with a male counterpart I might ask:

All the while, I’m watching and listening very carefully to what they’re saying, how they’re saying it, and what their body is doing.  Notice I’ll ask several variations of the question to see and hear several versions of “No”.  Once I’ve established a baseline, it becomes easier to identify when their “No” deviates from the baseline, indicating a soft “No”.

Once you’ve established a baseline, it’s time to turn your focus on the negotiation.  However, you need to be careful because one question does not fit all.  You need to tailor your strategy depending upon the style of negotiation.

In distributive negotiations where the primary goal is maximizing value in the short term your questions are designed to test assumptions and create the perception of power.  Examples of typical questions include:

Expect the other party to attempt to conceal and hide information during distributive negotiations.  You’ll look for deviations from the baseline to give you an indication when the other party is being less than truthful.  See also, “Anything you Say” for additional information.

Collaborative negotiations are fueled by trust, relationship, and creativity.  Your questions need to explore options, build consensus, and test boundaries.  One of the most powerful questions to ask the other party when collaborating is, “under what circumstance would you consider ……”.  Other examples of questions include:

Finally, questioning strategies are not complete without planning expected answers.  Everyone knows you plan your questions, however, few people plan out potential answers to their questions.  If you’ve planned expected responses it’s easier to look for deviations to the baseline because you will know what you are looking for before you ask the question.  Plan expected responses from the other party in three categories; good, bad, and ugly.